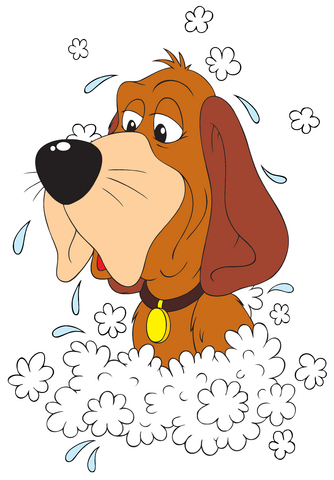 Lord Toric sat at the table brooding over his meal.  “I am the Lord of the fleas,” he sulked.  “How can I rule a kingdom that’s washed away every year?”

During the winter his realm was safe, but when spring came it brought with it the Great Dog Wash.  Everyone brought their dogs to the park to be bathed and Lord Toric’s kingdom was struck with floods and mounds of thick suds.

“This year will be different.” He pounded his fist on the table. His plate of food danced on the table’s surface. “This year I will find us a home that lasts forever.”

He agonized over what his kingdom had gone through year after year on the day of the Great Dog Wash.

One year Lord Toric had moved his kingdom onto the back of a Great Dane. “We this is the perfect place for the kingdom,” he told his subjects. “A dog this tall cannot be dunked.”

All went well until the washers commanded the dog to lie down in the large tub of wash water and roll over.

The next year he moved the kingdom onto an Old English sheep dog.  “Ah, this is much better,” he said.  “It’s not as tall as the Great Dane, but there is plenty of room for everyone, and lots of shade, too.”

That day the washers had the big dog sit in the water and when they had the dog lie down and roll over as usual, Lord Toric had a wonderful plan.

“Everyone, hold on,” he bellowed.  Every citizen of the realm wrapped their arms around the many hair-stalks. Not a soul was lost, but they were more than a little wet.

Lord Toric relaxed. Believing the danger had passed, he surveyed his subjects with a soggy smile.  Then there came a terrible chomping, chopping sound.  One of the washers grabbed a pair of sheep shears and hacked away at the dog’s thick coat.

That was the year everyone in the kingdom got a hair cut whether they needed it or not.  After the hacking had stopped, another washer brushed away all of the loose hair and Lord Toric and all of his subjects.

“No one was very pleased that year,” he mumbled, “especially the women.” Lord Toric rubbed his head where the hair had not quite grown back.  “But this year will be different!” He thumped the table again.

The next day Lord Toric still had not come up with a new idea for his kingdom.  As the Collie, on which the kingdom now lived, waited in line to be washed, Lord Toric looked around, frantic to find a new home.

The washing began.  Splash!  They dunked the Great Dane.  Then the Old English sheep dog.  Then the German Shepherd, followed by an Afghan.  Next it would be the Collie’s turn.

Lord Toric commanded everyone to pack up all of their belongings and get ready to move.  The Collie entered the water. The kingdom of fleas hopped, skipped, and bounced toward the tail.  Lord Toric’s kingdom leapt onto the nose of the next dog in line.

They fled from tail to nose until they got to the last dog.  With his kingdom balanced on the jiggly tail of a Jack Russell terrier, Lord Toric searched for a suitable place. Panic rose in the subjects of Lord Toric.

“Staying here is not an option,” he thought.  “This dog is much too small and the confounded thing will not be still!”

He heard someone shout from the far end of the park.  He looked up and there came the Mayor, running with a tiny dog tucked under one arm and his other hand holding unto his slipping, flapping toupee.

When the Mayor set his Pomeranian down, Lord Toric ordered his subjects to leap to the back of the small dog.  As the Mayor stood up his toupee slipped.  He straightened it with a quick hand.

In a flash Lord Toric got an idea. He ordered everyone in the kingdom to pinch the small dog. It yipped and scratched.  As the Mayor leaned down to quiet his dog, Lord Toric shouted, “Jump!”

When the Mayor stood up his toupee stayed in place.  He walked throughout the park smiling and petting all of the dogs, and his toupee never slipped once.

Lord Toric smiled and thumped his chest with pride.  He had finally found the perfect home for his kingdom.  After all, no one dunks the Mayor on the day of the Great Dog Wash.