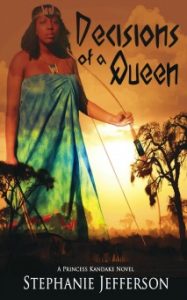 When Princess Kandake reached 14 years, the age when all Nubian women left childhood, she was named as the next to rule the kingdom. That same year she rescued her brother from foreign warriors, ruled in her father’s place when illness brought him to the edge of death, cured a poisoned pharaoh and prevented an evil adviser from seizing Egypt’s throne, and then rescued her sister from a dishonorable prince and blocked his path to Scythia’s throne. But all of that was last year.

Now she is 15 and must begin life as a woman and Nubia’s future queen. There are so many decisions.

The king of Aksum has requested Kandake’s help to flush out raiding bandits that are encamped within the Strand.  The sovereign of Scythia requests Kandake to assist his daughter in attaining the skill level of a Nubian warrior—and contend with the prince who brought harm to her sister. In the midst of all of this, Kandake must be a mother to her adoptive daughter, when she is little more than a child herself.

Every person in Nubia has an expectation for Princess Kandake and each situation requires the wisdom of a queen—including setting the date for her marriage ceremony.

Can Princess Kandake become the ruler the kingdom deserves, continue to grow in strength as a Nubian warrior, be a good mother to her daughter, and most of all, is she ready to become the wife she believes she must be?