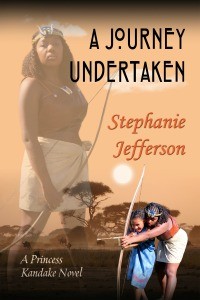 Much has happened in the life of Princess Kandake since being named as heir to her father’s throne. From winning the release of Prince Alara captured by unknown enemies to saving the life of the pharaoh of Egypt and preventing the usurping of that throne, situations that have refined Princess Kandake’s warrior skills and queenly diplomacy to well-honed expertise.

Now Princess Kandake must journey to the kingdom of Scythia to confirm an alliance between Nubia and that kingdom. But Scythia is a place where women are viewed as weak and unintelligent. In in that kingdom it is unlawful for a woman to ride a horse or carry a weapon, both of which Princess Kandake does every day and with absolute proficiency.

As representative of the throne of Nubia, Kandake is forced to deal with the Sovereign of Scythia who questions her abilities because she is female. And more, she must rescue her sister from a power-hungry, throne-craving prince, and defend a friend whose honor could cost him his life. Such circumstances have placed Kandake in a position where she must choose between using her warrior skill or the diplomacy of a future queen. The princess is speaking, but Scythians are not listening.