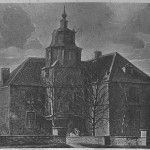 Kayli stood behind the tree, panting, more from fear than exertion. She waited for them to find her. No one came. The full moon in a cloudless sky made the night bright as day. She was sure they’d seen her.

It’s so cold I can barely stop my teeth from chattering. If they don’t hear the clicking, for sure they’ll see my breath in the air.

Kayli crept away from the tree and ran, half bent, to the nearest bush. “Right, Kayli,” she muttered. “This was really smart.” She pushed the leaves out of her face. “You don’t have anywhere to go. You don’t have food or a jacket. And it’s freezing out here!” She crawled over to the next stump of tree or bush, anything she could hid behind.

She looked down at her clothes. Her jeans were dark enough to go unnoticed, but her bright, pink T-shirt was sure to reflect the moonlight. If the fabric didn’t catch their attention, the silver sparkles, that she glued on by hand, certainly would. With handsful of mud, Kayli darkened each bright crystal and the ring of glitter that surrounded each gem. “My favorite shirt,” she moaned as she darkened every last bit of shininess.

It was the sparkles that started the trouble in the first place. “Windsor Hall is a place for ladies, not hussies,” Mrs. Thornbuccle said, looking down her nose at Kayli. “Ladies never draw attention to themselves.”

That’s what she always says whenever I do anything to change that drab uniform they make us wear.

“And what’s a hussy anyway.” She felt the thin strand of a spider’s web blow across her face. “Ewww!”

Kayli scrubbed her face with her mud-caked hands, pulled her hair away from her face tying it into a hasty braid. “That’s another thing Mrs. Thornbuccle says ladies don’t do.” The voice of Windsor Hall’s Mistress echoed in Kayli’s mind. “Ladies of Windsor Hall wear their hair loose and flowing, as nature intended.”

“Ugh, I can’t get away from her, even out here.” Kayli dodged from one clump of cover to the next, working her way through the valley. “I’m never going back! The rules are stupid! I don’t want to look like everyone else.”

Kayli looked at her mud-stained top. “I won’t stay there one more day! I’m going where people can appreciate style and a little flair.”

Covering the next patch of ground was going to be tricky. It was as bald as the top of an old man’s head—not a tree or bush in sight. Should she try her luck and cross it? It was the shortest distance to the highway. Or, should she play it safe and stay in the tree-line that wrapped around the edge of the field?

“Which way? I’d flip a coin if they let us have money.” Kayli decided to split the difference. She ran in the tree-line to the half-way point, then, sprinted the rest of the distance across the open space.

Just as she ducked behind the brush on the other side, Kayli turned to see her pursuers break through to the clearing.

“You may as well come back Miss Kaylin.” Their voices carried in the darkness. “Your place is in Windsor Hall.”

“Stuff it!” she yelled, “and my name is Kayli. When will you people get that straight?” She turned and ran.

“Most unlady-like.” The words caught up with her as she fled.

Kayli pushed through a hedge only to meet up with a large tangled vine of sharp barbs. They grabbed at her clothes and ripped her skin as she pushed her way through to the highway. Her skin burned and her blouse scraped at her with the spines that clung to it. She didn’t dare slow down; her pursuers were not far behind.

She ran down the wide road toward the city. The even ground made for easy travel, but the slow incline pulled at her remaining strength. She heard yelps of pain.

“They’re getting closer.” Kayli glanced over her shoulder. The bushes were moving not far from where she came through. Sucking down air, desperate to ignore the pain in her side, she kept running. Her ankle twisted. The blacktop raced toward her face. She threw an arm in front of her just before she face-planted in the middle of the road. Tires squealed behind.

“Are you all right?” Gentle hands lifted her from the ground. “What are you doing out here in the middle of the night? I almost ran you down.”

Kayli stared into the kind face of a woman just a bit older than her mother. “I’m fine. I must have tripped.”

“Where are you going?”

“I was headed into town,” she said, looking behind her. The three men chasing her stood on the other side of the highway staring in her direction. The woman’s gaze followed Kayli’s.

“I’m headed into town, myself. Why don’t I give you a lift?”

“Thank you,” Kayli said, climbing into the car.

“You never told me what you’re doing way out here this late at night,” the woman said as the car moved farther away from those chasing Kayli.

“I was camping with some friends. We became separated. I didn’t want to spend the night out here alone, so I thought I’d head back to town.” The lie was off her tongue and out of her mouth without a stumble or stammer. It was one of the many reasons her parents had sent her to Windsor Hall. They’d hoped the program would change her, get her on the right track.

“If you live there, I could drop you off at your house.”

Kayli sat silent as the car rolled through town trying to figure out her next move.

Kayli spotted a youth hostel. “Over there.” She directed the driver to the entrance.

“My friends…we were planning to spend the weekend camping. We agreed that if we got separated, we’d meet up here.” Another lie. Three months at Windsor Hall had done little to change the ease of her fabrications.

Kayli thanked the woman and rushed inside. Bright lights and the aroma of hot soup greeted her at the door. Warm air caressed her chilled skin. The décor wasn’t fancy, but everything was neat and clean. She brushed at the dirt on her skin and clothes.

“Welcome.” A woman seated in an over-sized chair set aside her book and stood to meet Kayli. “Please come in. There’s hot soup on the stove and if you like, I can pour you a mug of hot chocolate. I made enough for two.” She indicated the cup in her hand.

“Thank you.” Kayli accepted the offer of food and a place to sit, careful not to lean against the clean upholstery any more than necessary.

The soup tasted better than any she had ever eaten. The chocolate had just the right amount of sweetness. “I don’t have any money to pay for the room, but I’ll work for…” A huge yawn split her face nearly in two. “Excuse me, I didn’t realize I was so tired.” Her eyelids drooped.

“That’s all right, Dear, you won’t be here very long.”

The smell of antiseptic and glaring lights roused Kayli. She tried to turn over and go back to sleep, but found she couldn’t move. Her eyes ripped open.

She was in the infirmary of Windsor Hall. Leather belts that ran across her waist, ankles and upper arms, fastened her to the bed. Nurse Abrams stood on one side of the bed and the Mistress, Mrs. Thornbuccle, stood on the other. Kayli writhed, frantic to get loose.

“Please calm yourself,” Mrs. Thornbuccle said. “We found this in your room after you left.” From her hand dangled a small      plastic bag of little white pills. “It’s no wonder you have been acting this way. You haven’t taken your vitamins in over a month.”

Kayli glared at the woman. She would have told her to ‘stuff it’, but she feared she was already in enough trouble.

“Well, no matter. Some of our ladies find tablets difficult to swallow. Nurse Abrams has agreed to give your vitamins by injection.”

Kayli thrashed around as much as she could, but Nurse Abrams, efficient as usual, administered the liquid with no problem.

“My name is Janice Horton, but everybody calls me Jan,” she said, in between the snaps of her gum and puffs of her cigarette. “My folks want me to come here to learn some manners and stuff. But I like the way I am, how I dress.

Kayli nodded as she entered the girl’s information on the form. She raised the back of her hand to her nose in a graceful, fluid motion, and coughed softly. She sat upright and poised in her chair. Her crisp white blouse was buttoned at the neck and wrists. Her dark skirt smoothed over her knees, and her legs crossed at the ankles, just above her sensible shoes.

“How are things coming along, Miss Kaylin?” Mrs. Thornbuccle asked. She laid her hand on the back of Kayli’s chair.